Who is The V. L. Melchisedek?

The HOLY GOD’S HIGHER PRIEST, our venerable and great Master MELCHISEDEK is well-known by the countries and people he went with with the living CROSS and ROSE, and there are many millenial traditions which recognize him as the Bread and Wine’s carrier, sucessfuly emerged from the WATERS of the LIFE.

All MELCHISEDEK’S mystery is related with the man’s origin and fall in the Eden and, more precisely, in his intense work to make the ANTIQUE LEMURS come back to the HOLY MOTHER’s womb. The GREAT MASTER organized the first ORDER of the ROSE and the CROSS, and right there, between the Lemuria habitants, who fell in the horrible bad habit of fornication, materialism and egocentrism, for the first time the GREAT COSMIC DAY arose in the antique School of Mysteries of - THE ROSICRUCIAN ORDER.

In those ancient times, the GREAT MASTER publicly taugth the narrow path conducing to LIFE, taugth the VALUES of LOVE, DEATH, LIFE, of THE AWAKENING and realizing THE FATHER’S WILL, of I.A.O. He was the one who taught the deep mystery of the “GREATEST GOD”, IAO, who back then was known by the name of JANO, the two faced God whose belt carries the keys of heaven.

In the dark history of human kind, lost in the Lemuria’s fog, The Master taught the Holy Sacrament’s Sacrifice of Eucharist, the BREAD and WINE’S partition.

MELCHISEDEK (MELQUISEDEC), the Supreme Great MASTER of the ROSICRUCIAN ORDER, became VISHNU’S FIRST AVATAR, and was known in all the orb as the DIVINE SNAKE, over whose SEVEN HEADS the SACRED VOWELS contained in OANNES burn as igneous flames. 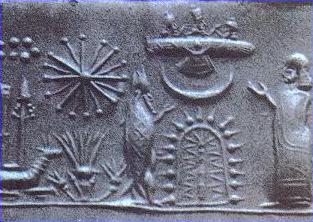 OANNES is the FISH MAN, the SEMI-GOD, VISHNU’S FIRST AVATARA, who comes out of the sea, from the abyss of the august waters. 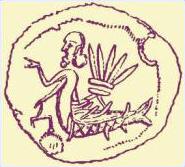 The HARI-PURANA and many other India’s sacred books clearly affirm that VISHNU took the figure of a FISH with human head in order to rescue the VEDAS lost in the Flood, and he, OANNES, VISHNU’S AVATARA made the INITIATED VISVAMITRA and his family, build the ARC or ARGHA which allowed them to survive the cataclism, and OANNES was with the survivors till they got their CHRISTIFICATION. 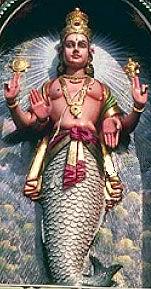 OANNES kept his figure of a FISH with human head all the time and each day at dusk, he submerged to the bottom the water till the next dawn.
This allegory of VISHNU’S AVATARA, OANNES, can be seen in RAMA GOD’S TEMPLE as a figure of a man coming out of a fish’s mouth with the VEDAS in his hands, after recovering them from the flood waters.

This version can also be found in the old CHALDAIC’S manuscripts where in UR’s homeland, OANNES was known by the name of DAGON.

DAGON, or OANNES is the same KNEPH from Ancient Egypt who rests over a SEVEN-HEADS SNAKE.

In the Egyptian Mysteries, THAT, which is the ABSOLUTE, is symbolically expressed by beautiful low relief of sublime art showing a volute SNAKE around a vessel with water, inclined towards the seven-sacred-letters crowned head and in actitude of fertilizing them with its breath.

The Hidden Wisdom, the ROSE CROSS Wisdom, is the Snake’s Wisdom, is the SACRED SNAKE KUNDALINI who activates the seven shakras, CHRISTIFY the seven bodies, known by the INITIATES and the MASTERS of GREAT LAKE’s, nowadays called TITIKAKA.

OANNES as VISHNU’s AVATARA, COSMIC CHRIST’s AVATARA, arises majesticly from the lake’s crystal waters in the great shape of a seven headed Snake with the flaming igneous letters of the hidden name over its head.

These letters are manifested in A, E, I, O, U, M, S, the carried out OM verb, and OANNES who’s known by the Earth of Sun’s inhabitants as KONTICI WIRACOCHA. 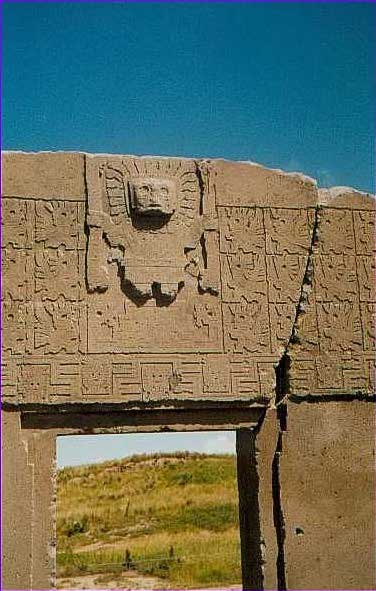 (Representation of KON TICI WIRACOCHA on The Gate of The Sun)

The Order Of Melchisedek

101. OANNES, the SELF-FULFILLED WORD as BODHISATWA of the GREAT BEING, of MELCHISEDEK, is also referred to by the GENESIS.

102. OANNES blossomed with all splendor of the Father’s Sapience there in the ancient Caldea, where he had many disciples that elevated themselves to the NIRVANA ineffable regions; others kept their christened bodies full of life until they assimilated into themselves the elixir of IMMORTALITY.

103. OANNES and his real BEING, THE GREAT MELCHISEDEK, also conferred SUBLIME INITIATION to the Patriarch ABRAHAM.

104. After a bloody battle in which Abraham came out victorious; he prostrated himself full of sublime adoration before MELCHISEDEK, who communicated to him the unutterable Secret of the SOLAR ARCANUM and also taught him the PARTITION OF BREAD AND WINE. Like such is found it transcribed in the book of Genesis. 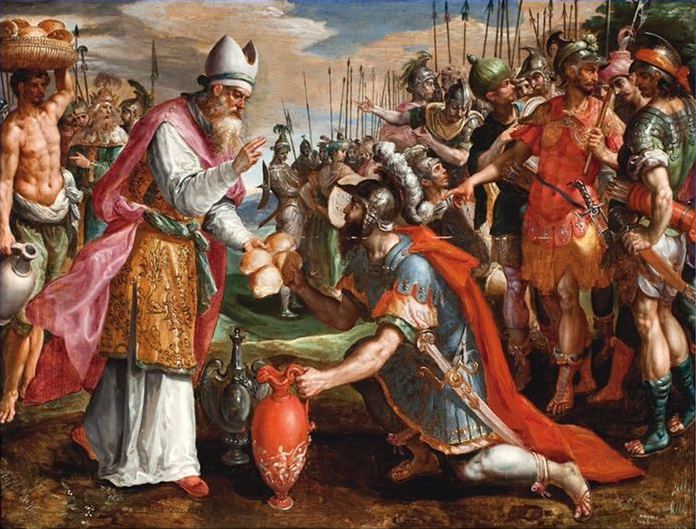 105. The Great PATRIARCH ABRAHAM received the INITIATION there in the far away land of UR, in Caldea, and it was the GREAT BEING, the PRIEST OF THE HIGHEST GOD, MELCHISEDEK, who next to the Venerable SANAT KUMARA, accepted ABRAHAM INTO THEIR MAJESTIC TEMPLES. Abraham is a Rosicrucian Priest.

107. JESUS THE CHRIST is, according to the ORDER OF MELCHISEDEK, one of the most exalted ROSICRUCIAN MASTERS. 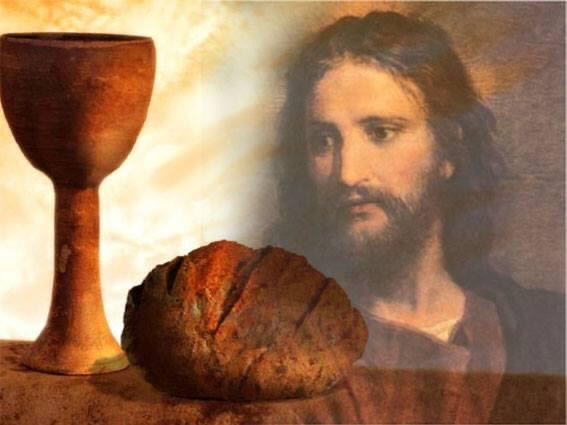 108. MELCHISEDEK is an inhabitant of the ABSOLUTE and in far away MAHAVANTARAS or cosmic days, resigned to that unconceivable happiness and because of that he is PRIEST OF THE HIGHEST GOD.

109. JESUS the CHRIST is also an INHABITANT OF THE ABSOLUTE, and the same as MELCHISEDEK, had the courage to resign to the indescribable joy of the divine ABSOLUTE’S bosom in order to stay to work benefiting the human anthill.

110. MELCHISEDEK, JESUSCHRISTUS, are the marvelous ROSES that flourish full of FIRE AND LIGHT in the unrevealed CROSS OF THE ABSOLUTE.

111. MELCHISEDEK is the Majestic PLANETARY REGENT of our planet EARTH and his TEMPLE is found in the igneous center of the Earth, where he officiates with the majestic rituals from Life’s dawn.

112. MELCHISEDEK and his ORDER, are conscientiously present at those Holy Rituals that are carried out in SUPERIOR PLANES of Cosmic Conscience.

113. By the exposed, the origin of the ROSICRUCIAN ORDERS is made clear, the same who are elevated members of the Majestic ORDER OF MELCHISEDEK.

114. Many were the ones that thought and defended at their nerves cost, the hypothetic and peregrine idea that the ROSICRUCIAN ORDER had its origin among the Egyptians. All those investigators lacked the LIGHT OF CONSCIENCE to “SEE” among the shadows of their ignorance.

115. The ROSE AND THE CROSS, the ROSICRUCIAN ORDER is the same ORDER OF MELCHISEDEK that emerged at life’s dawn, millions of CENTURIES ago and in former MAHAVANTARAS or past cosmic days.

116. It was precisely the MOST ELEVATED PRIEST OF THE HIGHEST GOD: MELCHISEDEK, who established the ORDER OF MELCHISEDEK, THE ROSICRUCIAN ORDER, there in the far away Lemuriah.

118. Many INITIATED and ROSICRUCIAN MASTERS helped and help in that supreme and great mission, constantly lighting up the ROSICRUCIAN light in all times and places.

119. In the Epistle written by PAUL to the HEBREWS, we found the following versicles that refer themselves to MELCHISEDEK the DIVINE GREAT PRIEST.

120. “BECAUSE THIS MELCHISEDEK, KING OF SALEM, PRIEST OF THE HIGHEST GOD, THAT CAME OUT TO MEET ABRAHAM THAT RETURNED FROM THE FALL OF THE KINGS AND BLESSED HIM, TO WHOM THUS GAVE ABRAHAM TITHES OF EVERYTHING, WHOSE NAME FIRST OF ALL MEANS KING OF JUSTICE AND ALSO KING OF SALEM; THAT IS, KING OF PEACE, WITHOUT FATHER AND WITHOUT MOTHER, WITHOUT LINEAGE, THAT HAS NO BEGINNING OF DAYS OR END OF LIFE, BUT WAS MADE TO THE IMAGE OF GOD’S SON, REMAINS PRIEST FOREVER. CONSIDER THEN HOW GREAT THIS ONE WAS, TO WHOM EVEN ABRAHAM THE PATRIARCH GAVE HIM TITHES OF ALL THE TREASURE.” (Hebrews Chap. 7; vers. 1 to 4)

121. Further it says: “And this is manifested, if similar to MELCHISEDEK arises a different priest, not constituted according to the law of the commandment about the descent, but according to power of an indestructible life”. “Then testimony is given of him: You are Priest forever, as per the Order of Melchisedek.” (Id. 15 to 17).

123. The jewish priests were not kings and priests and the Kings were not Priests. Melchisedek the KING of SALEM (the Pagan city) was at the same time PRIEST and not jewish priest, but HE, the Priest of the Highest God, fully and totally foreign to the jewish religion of the patriarchs, was who took BREAD AND WINE, and ABRAHAM received the act of the Transubstantiation, as well as received the Sacred Word of IAO, at the delivery of the tithes.

124. The Pagan Priest, Priest and King of the pagan city of Salem, being GREATER than Abraham, blessed this one, fulfilling so the scripture: “It belongs the eldest to bless the youngest”.

125. Patriarch Abraham learned from the Priest of the Highest God, from MELCHISEDEK, the divine and esoteric wisdom that transmitted to his people. Naturally that all this wisdom is found transcribed in the bible books, but unfortunately for the jews and “christians”, as well as for the rest of “believers”, all esoteric Wisdom of Melchisedek, is found in code and the code only possess the INITIATED in the MYSTERIES OF FIRE and of the LIGHT, according to the ORDER OF MELCHISEDEK.

126. The tithes that Abraham gave the PRIEST AND KING are symbolic, as in them, the blessed name is hidden.

128. I.A.O. constitutes the breath of life placed between the I which is the erected principle masculine and the oval form of the O, which is the feminine principle. This is the SOLAR ARCANUM, or REAL ARCANUM, taught by MELCHISEDEK.

129. The whole biblical science and wisdom synthesizes itself in the Mystical Decade, in the I.A.O, in the Great Real Arcanum taught by MELCHISEDEK, the Priest of the Highest God, for the constitution of CHILDREN OF THE SUN, of the SOLAR CHRISTUS, and thus form with CHRISTIFIED men and women, the SOLAR CITY, composed by SOLAR men and women that have lived CHRIST teachings, synthesized in the CHRISTIFYING values.